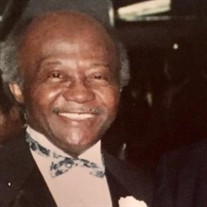 &#8220;To everything there is a season and a time for every purpose under Heaven&#8221; Ecclesiastes 3:1. NIV A Time to Be Born: David Lee, was born on October 21, 1926 in the City of Malone, Jackson County, Florida. He was the first... View Obituary & Service Information

The family of Mr. David Hayes created this Life Tributes page to make it easy to share your memories.

“To everything there is a season and a time for every purpose...

Send flowers to the Hayes family.