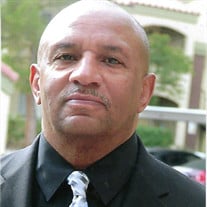 On Wednesday April 29, 2020, in the will and plan of God, David Lee Bellamy was called from labor to reward. David, the youngest of eight children of the late Ernest Bellamy and Geneva Council Bellamy was born November 18, 1956 in Pitt County of North Carolina. David was educated in the public schools of Martin County. He enjoyed sports and played a little basketball in high school. After high school, David was employed at various jobs in the area including Carolina Enterprises and Grady White Boat Company. David later married the Love of his Life, Phyliss McNeil On March 7, 1981 in Robersonville, North Carolina. David and Phyliss resided in and around Martin County before relocating to Las Vegas Nevada, where he was employed with Desert Cab Company. David forever touched the lives of all whom came to know him. David was a great friend to many and well known for his generous spirit. If you had ever met Dave, Big Dave or David in any way, he always said and believed that all people are basically good and that God put people in your life for a reason. When you see a change in a person’s life as a direct result of getting to know God, had become David’s belief that we all have a reason for being on this earth. David joined and became a member of Pentecostal Temple Church of God in Christ in Las Vegas, where he loved teaching Sunday school. For the last six years, Elder Bellamy planted a seed and was on a mission to carry out plans for what the Lord commanded him to do and to make preparations for himself in heaven. David’s wife and family noticed the changes in his life, as he found the Lord anew and began a new chapter in his life, which was to serve the Lord. Elder Bellamy loved his family and enjoyed spending time with them. He looked forward to going home in the latter years to preach and teach the word of God to all of his family and friends at churches in and around Oak City. David’s wife Phyliss, would like to thank God for allowing her to have had this journey with Him. “He made an impact on all of our lives”. “The fight is over, The Battle is Won, The Victory is Yours.” David is preceded in death by sister, Joyce Howell; brothers, Ernest Bellamy and William Jones. David is survived by his loving and caring wife, Phyliss McNeil Bellamy; David’s memories are also shared with his dear siblings, whom he loved to the end, William Lee Dolberry (Mary Ann), William Bellamy, Ulysses Bellamy (Pauline), Shirley Martin (Johnnie), Arnie Martin (James); a host of nieces, nephews, cousins and friends who will miss him dearly.

On Wednesday April 29, 2020, in the will and plan of God, David Lee Bellamy was called from labor to reward. David, the youngest of eight children of the late Ernest Bellamy and Geneva Council Bellamy was born November 18, 1956 in Pitt County... View Obituary & Service Information

The family of Mr. David Lee Bellamy created this Life Tributes page to make it easy to share your memories.

Send flowers to the Bellamy family.