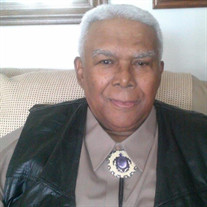 The family has requested that in lieu of flowers please make monetary contributions to: EXN Pitt GAP Native American Fraternity, 739 Galloway Road Grimesland, NC 27837 Connie “Greywolf” Glast departed this life on Monday, January 18, 2021, at 10:00 pm at Vidant Medical Center in Greenville, NC. Connie was born on June 20, 1942, to the late Charlie & Hannah Glast in the Pitt County-Belvoir Community. His parents Charlie & Hannah Glast, and brother Eddie Glast preceded him in death. Connie was a man of great wisdom and knowledge. As a young boy growing up, he was very inquisitive; always investigated how things work and checking things out he didn’t understand. His love for reading afforded him the knowledge that he could carry on a conversation with anyone on any level. His love of conversation was a unique quality he possessed, as he would be able to discuss a plethora of subjects with anyone who would listen. Connie was able to learn a vast amount of information through documentaries, PBS, and the Discovery channels on television. Connie was an avid lover of cars, especially antique vehicles, and could determine the make, model, and year from a single glance. One of his favorite activities was to read car magazines and circle the cars that he has owned throughout his lifetime. Connie graduated from Bethel Union in 1960. After graduation, he was provided a job with Food Mart Greenville as the Produce Manager which helped him start his work history and he loved it because he got to talk with a lot of different people. Connie enlisted in the United States Air Force in January 1964 and served until March 1966. On September 13, 1966, Connie married Carolyn Little, the girl he fell in love with while watching her as a cheerleader for East End High School in Martin County. Through this union, two loving children Sharon and Shawn were blessed with young parents who were madly in love. Upon his departure from the U.S. Air Force, Connie continued his working career in several roles. His work history included Fieldcrest Mills – Eden, NC – inspector of rugs for 3 years; transferred to Fieldcrest Mills/Mohawk, Inc. in Greenville, NC as a mechanic for 15 years; EATON/NACCO/HYSTER-YALE, Greenville, NC for 20 years where he retired as a Quality Control Analyst. In the 70’s he also worked part-time as an officer with the Greenville Police Department Reserve. Connie continued to remain inquisitive in his adult life and wanted to learn more about his family roots and heritage. With the help of his cousin, Bobby Atkinson, he discovered the rich history of his ancestry and traced his lineage through his grandfather who was a Native American. Connie learned that his family migrated from Sampson County, NC, and are descendants of the Coharie Tribe. With the knowledge of his Native history, Connie was able to travel to and participate in Pow Wows across North Carolina, South Carolina, Virginia, and West Virginia. He was an active member of the Eastern Bull Drum and Singers group, orchestrated by Joey Crutchfield. He also served as an Elder Advisor with the Epsilon Chi Nu Fraternity at East Carolina University, which is the first Native American Fraternity in the nation. Since discovering his Native American roots, Connie was able to serve as a mentor to countless young men who have looked up to Him as Father of Wisdom. It brought Connie great joy to spread the history and knowledge of the Coharie Tribe and Native American lifestyle with his family, especially his grandchildren. He was able to have them actively participate in sacred Pow Wow traditions through song and dance. Connie was the patriarch in the Brown family and truly loved his family and their heritage. He educated the family on their history and lineage as he lived by the creed, "You have to know where you come from, to know where you are going." Connie had a dream to keep the history alive through the next generation and hopes that they keep learning and discovering more about themselves and their family with every opportunity. Let us keep up the momentum, as he can look down upon us from heaven with a smile to say, "My knowledge and work was not in vain." With hearts grateful for his life, but devasted by his death, he leaves his loving Wife, Carolyn Little Glast of 54 years; Daughter, Sharon White (Darin); Son, Shawn O’Brian Glast of the home; Grandson, Trevian O’Brian White of Minneapolis, Minnesota; Granddaughter, Tiara Nicole White of Greenville; Goddaughter, Sonya Congleton (Jimmy) of Greenville; Godson, Joey Crutchfield of Grimesland; Brother, Deacon Charlie Hooks (Dr. Ella); three sisters, Emma Lucas and Brenda White of Greenville, and Ruby Hollman (William) of Winston-Salem, NC; Niece, Charlene White Clemons (Clarence) of Greenville and; Nephew, Travis (Jessica) of Athens, Ohio; and a host of other nieces, nephews, cousins, sisters-in-law, brothers-in-law, and many great friends. Connie loved all of his relatives dearly and he will be missed! May the legacy of Connie Greywolf Glast live on.

The family of Mr. Connie Glast created this Life Tributes page to make it easy to share your memories.

The family has requested that in lieu of flowers please make...

Send flowers to the Glast family.