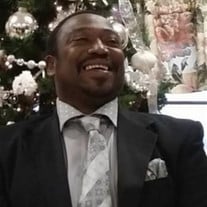 For we know that if our earthly house of this tabernacle were dissolved, we have a building of God, an house not made with hands, eternal in the heavens 2 Corinthians 5:1 Pastor Clinton Earl Wiggins “Boochie” entered eternal rest on Friday June 14, 2019 peacefully at his home with his wife by his side after a lengthy illness. Clinton was born on June 23, 1965 in Martin County to Barbara Wiggins and the late James Earl Wiggins, Sr. the youngest of seven children. Clinton attended Martin County Schools before entering Job Corps of Breckinridge Kentucky. After returning to Robersonville, he worked on the farm for Mr. Earl Whitehurst for many years before moving to San Antonio with his brother MSGT Jarvis Wiggins. Clinton later met and married the love of his life Mrs. Joyce Warner on June 14, 1997. Clinton pastored Grace New Beginnings and Harvest for 10 years. He worked at Time Warner Cable, Stevens Transport Company, Cudds Trucking Company, and was the owner Wiggins Carpet Cleaning Company and a licensed electrician. He was a very hard worker, advent fisherman and as he would tell you a jack of all trades. As you all know a “MASTER JOKSTER”. He was preceded in death by his brother, David Ray Wiggins and son, Rodney Warner. Clinton leaves to cherish his memories, his mother, Barbara Wiggins of Gold Point NC; his wife, Joyce Warner Wiggins of the home; three children of whom he loved and devoted his life to, Cinnamon Warner of Beaufort SC, Crystal Price (DeJerald), Sherita Baker (Jacob) all of San Antonio TX; four sisters, Angeline Daniels of Chocowinity NC, Patricia Chapman (Wilbur) of Bethel NC, Julia Wiggins of Gold Point NC, Ischa Bland of Greensboro NC; two brothers, James Wiggins (Liz) of Winterville NC, MSGT Jarvis Wiggins (LT Evelyn Wiggins) of San Antonio Texas; eleven grandchildren; nine aunts; nine uncles; a host of nieces, nephews, other relatives and friends.

For we know that if our earthly house of this tabernacle were dissolved, we have a building of God, an house not made with hands, eternal in the heavens 2 Corinthians 5:1 Pastor Clinton Earl Wiggins &#8220;Boochie&#8221; entered eternal rest... View Obituary & Service Information

The family of Pastor Clinton Earl Wiggins created this Life Tributes page to make it easy to share your memories.

For we know that if our earthly house of this tabernacle were...

Send flowers to the Wiggins family.