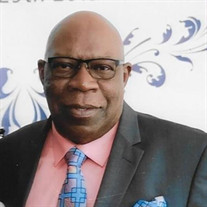 Clifton Barrett was born in Greenville, North Carolina to the late Joe and Ollie Graham Barrett. He departed this life on Thursday, May 6, 2021. Cliff attended C.M. Eppes High School in Pitt County, North Carolina. He was a graduate of the last C.M. Eppes High Senior Class of 1969, Bulldogs. Cliff was a very intelligent student with a great sense of humor and was mischievous. He loved laughing and making other people laugh. He looked for ways to empower and share his knowledge and resources with others. He had a photostatic memory which was outstanding. After high school he attended North Carolina A&T University in Greensboro, NC where he studied and achieved his degree in History. It was also in Greensboro where he met and married his friend, helpmate, and love of his life, Shereeda “Reeda”. After spending a short time in Washington, DC, “Reeda” and Cliff moved back to North Carolina where he started a career in the restaurant and fast-food industry. He spent 5 years with Burger King where he developed into a strong manager and business leader. His work ethic and business savvy caught the attention of his hometown friend, Columbus Vines, who had become Regional Vice President with the Hardee’s Corporation in Atlanta, GA. He mentored Cliff in the fast-food industry and asked Cliff to join him in Atlanta. Clifton purchased two Hardee’s fast foods businesses and became the first black franchisee owner in Hardee’s company history both national and international. Knowing Cliff, you can appreciate that all these accomplishments failed in comparison to being introduced to The Institute of Divine Metaphysical Research, by his brother Billy. It was there that he realized that “God” came down in our time as Dr. Henry Clifford Kinley. Cliff was a member of the Stone Mountain Branch of IDMR for over 20 years where he served in various roles, to include president of that branch, until transferring his membership to the Raleigh North Carolina Branch in late 2020. Cliff started and finished his career working in the DeKalb County School System where he was Training Manager and Supervisor of Food and Nutrition Services for 17 years. He retired and returned to Greenville, NC in November of 2020. He is proceeded in death by his brother, Sammy Barrett; his sister, JoAnn Pitt, mother-in-law, Carrie Holloway, sisters-in-law, Karen Holloway, Gladys Barrett, Joyce Barrett; brothers-in-law, Thomas and Antonio Holloway, and Frank Brown. He leaves to cherish his memories, his life support and companion, wife, Shereeda Barrett of Greenville, NC; daughter, Monica Godwin (Mario), Atlanta, GA; two sons, Ahmad Barrett and Clifton Barrett, Jr of Atlanta, GA; four grandchildren, Shamyiah, Tierra, Destinee, and Qui’andrea Smith; three great grandchildren, Omari, Jadon Barrett and Dajay Barrett; four sisters, Shirley Brown, East Orange, NJ, Delores “Lola” Thompson(Bobby) of Grimesland, NC, Janice Scott, Jacksonville, FL, Paulinda Council (Ricky) of Jacksonville, FL; three brothers, Joe Barrett (Andrea) of Upper Marlboro, MD, Billy Barrett of Greenville, NC, Ronnie Barrett of Decatur, GA; siblings-in-law, Mary Lee Barrett, Nina Blackwell (Walter), Michelle Vauss, Randy Pitt (Juanita), Terry Scott; one surviving aunt, Vivian Graham; a host of nieces, nephews, other relatives, and family friends.

Clifton Barrett was born in Greenville, North Carolina to the late Joe and Ollie Graham Barrett. He departed this life on Thursday, May 6, 2021. Cliff attended C.M. Eppes High School in Pitt County, North Carolina. He was a graduate of the... View Obituary & Service Information

The family of Mr. Clifton Barrett created this Life Tributes page to make it easy to share your memories.

Clifton Barrett was born in Greenville, North Carolina to the...

Send flowers to the Barrett family.