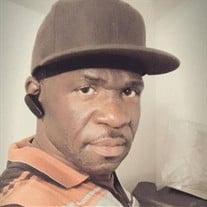 Christopher Sherrod was born on December 29, 1969, the first born son to Ethel Sherrod Lynch. God sent his guardian angel to bring him home on March 16, 2019. Christopher received his formal education in the Pitt County School System. Christopher was pursing his secondary education at Colorado Technical University up until his health failed. Christopher was very artistic and left his mark with those he loved, through poetic expression and artistic creations. Christopher was known throughout the community as one of the best kitchen beauticians. Many heads were blessed by his hands in the kitchen. “Chris” as he was affectionately known by family and friends was a loving son, grandson, uncle, brother, nephew, cousin and friend. When you were in his presence there was never a dull moment, as he always kept you laughing. In addition to his maternal grandparents, Maggie Sherrod and Walter Howard, Christopher was also preceded in death by his father, Primus Lynch; his younger brothers, Jasper and Calvin Sherrod; his sister, Demetrilla Lynch. The love for his family extended well beyond death! He leaves to cherish his memories his mother, Ethel Lynch of Bethel, NC; two sisters, Felinda Purvis (Charles) of Bethel, NC and Erica Highsmith (Douglas); three brothers, Nathaniel Lynch, Clayton Lynch and Deontay Lynch all of Greenville, NC; two aunts, Maxine Jones of Greenville, NC and Beverly Sherrod of Bethel, NC; two uncles, James Sherrod (Shirley) of Bethel, NC and Willie Sherrod (Mary Ann) of Greenville, NC; nephew, Tishaun Lynch; nieces, Jessica Purvis and Mari’ella Lynch; a host of other cousins and friends. “Judge not, that ye be not judged” Matthew 7:1

The family of Mr. Christopher Chenney Sherrod created this Life Tributes page to make it easy to share your memories.

Send flowers to the Sherrod family.