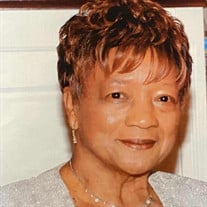 For we know that if our earthly house of this tabernacle were dissolved, we have a building of God, a house not made with hands, eternal in the heavens. II Corinthians 5:1 Charlotte Jenkins Smith transitioned from earthly labor to her heavenly reward on Thursday morning, December 16, 2021 at her home on Brookhaven Drive in Greenville, North Carolina. She was born in Greenville, South Carolina to Mr. John Jenkins, Senior and Mrs. Lula Jenkins the eldest of 10 siblings. She was reared in Newport News, Virginia where she received her early childhood education and the high school diploma with honors. Charlotte received the Bachelor’s Degree in Health and Physical Education from St. Augustine’s College in Raleigh, North Carolina and the Master’s Degree in Education from Hampton University in Hampton, Virginia. Charlotte Jenkins Smith began her career in January 1959 as a Health and Physical Education teacher at C. M. Eppes High School. Over the next 3 decades, she taught at C. M. Eppes, E. B. Aycock Junior High, and Sadie Saulter Elementary School retiring in 1993. In addition, she was a certified teacher of driver’s education which she continued after her retirement from the regular classroom. Charlotte was a member of the North Carolina Association of Educators on the local, state, and national level. Her students remember her with such gratitude for imparting to them the love and fun of learning, the gift of special relationships, and skills gained for a lifetime. Charlotte Jenkins met her husband-to-be Greenville native John Bobby Smith, a math teacher at C. M. Eppes, early in her career. They were married on October 15, 1960. They celebrated their 50th wedding anniversary in 2010. They reared their children Rodney and Tiffany with much love and devotion. Charlotte and Bobby adored their grandchildren. Charlotte and Bobby loved road trips. Many weekends, summers, and holidays were spent with family up and down the east coast especially in Virginia. Charlotte and Bobby were endeared to each family of the close-knit Brookhaven neighborhood. Family and friends were always welcomed to their home. Charlotte was a member of York Memorial A M E Zion Church where she faithfully served as an usher, a member of the senior choir, a leader of physical fitness activities of the Vacation Bible School, and the Stars of York. Charlotte was initiated in 1957 in the Gamma Xi Chapter of the Alpha Kappa Alpha Sorority, Incorporated on the campus of St. Augustine’s College in Raleigh, North Carolina. She was one of the 16 Charter members of the Iota Kappa Omega Chapter of the AKA Sorority, Incorporated, Greenville, North Carolina on October 28, 1972. Through the years, she served the Iota Kappa Omega Chapter as President and Membership Chairman. She served on the Mid-Atlantic Regional Planning Committee. Using her gifts and talents, she worked tirelessly with the Sisterly Relations committee, the Annual Senior Citizens Celebration with sessions of adaptive physical fitness, and the Biennial Fashionetta Scholarship Pageant with escorts and Fashionetta Pearls in waltz and formal presentation. Charlotte became a life member of the Sorority in 1990 and she has been honored as a Golden Soror since 2007. We salute her 64 years of dedicated service. Charlotte was preceded in death by her parents, her loving husband who passed away on February 11, 2012, and her brother, Keith Jenkins. Those left to cherish her memory are her son, Rodney Smith of the home and her legacy, Soror Tiffany Smith Bryant of Greensboro, NC; four grandchildren, India Holloway and Rodney J. Smith both of Greenville, NC, Tia Bryant and Tyson Bryant of Greensboro, NC; six sisters, Delories Brooks (James) Charlotte, NC, Gussie Dickens, Calabasas, CA, Betti Hinton (Milton) Cincinnati, OH, Barbara Baker, Newport News, VA, Keretha Whitfield, Hampton, VA, and Soror Glenda Mayo, Pittsburgh, PA; two brothers, John Jenkins, Jr., Newport News, VA, and Alton Jenkins (Terry) San Antonio, TX; a host of nieces, nephews, cousins, and dear friends who mourn her passing and will forever cherish and honor her memory.

For we know that if our earthly house of this tabernacle were dissolved, we have a building of God, a house not made with hands, eternal in the heavens. II Corinthians 5:1 Charlotte Jenkins Smith transitioned from earthly labor to... View Obituary & Service Information

The family of Mrs. Charlotte Smith created this Life Tributes page to make it easy to share your memories.

For we know that if our earthly house of this tabernacle were...

Send flowers to the Smith family.