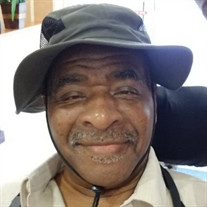 Charlie McKenly Wallace was born on October 15, 1945 to the late Elijah Wallace and the late Carrie Lee Walton-Wallace in Everetts, NC. Charlie was called home to be with our Lord on Wednesday, January 15, 2020 at Rutgers University Hospital, Newark, NJ. Charlie was formally educated in the Everetts and Robersonville, NC public school system. Charlie migrated to Newark, NJ after completing high school to look for work to provide for his young family. Charlie worked at Seton Leather, Food Fair and Ritter Food later known as Ritter Sysco Corp. He also owned and operated the Wallace Taxi Corporation with his older brother Walter Clayton in the 1970's. Charlie and Clayton would run the streets of Newark working their cabs at night and weekends while holding down full time jobs during the day and raising young families. Charlie was known for his sense of humor, love of everything, geography and was a follower of all news outlets. When Charlie met you would always ask "where are you from and what do you like to eat?" The Wallace family tradition included, yearly vacations to such places as Niagara Falls and up and down the East Coast. Going to the Newark Drive-In Theater to watch a movie, eating fried chicken in our pajamas was a favorite activity, AND yes Charlie and Helen's kids got sent down south to grandma's house for unofficial summer camp. Charlie's teenage sweetheart Helen also relocated to Newark, NJ where they married raised their four children; Vincent, Helen Jr., Charlie II and Solomon. Charlie was preceded in death by his siblings, Elijah Joseph Wallace, Esther Louise Wallace-Robinson and Walter Clayton Wallace. Charlie leaves to always cherish his memory, stories and jokes his wife, Helen Marie Wallace; his children, Vincent (Darlene), Helen (Raphael), Charlie and Solomon (Lisa); grandchildren, Ciara Amiya, Charlie McKenly and Alejandro (Jalessa); sister, Ella Mae Wallace-Howard (Douglas); brothers, Samuel Thomas Wallace (Virginia), Van Bernell Wallace (Kathy); a host of nieces, nephews other relatives and friends.

Charlie McKenly Wallace was born on October 15, 1945 to the late Elijah Wallace and the late Carrie Lee Walton-Wallace in Everetts, NC. Charlie was called home to be with our Lord on Wednesday, January 15, 2020 at Rutgers University Hospital,... View Obituary & Service Information

The family of Mr. Charlie Wallace created this Life Tributes page to make it easy to share your memories.