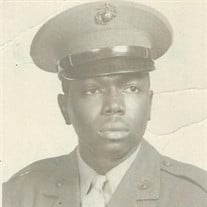 Charlie Benjamin Andrews aka “Charles” was born on October 16, 1936 the second child of the late, Clinton and Elizabeth Andrews in Martin County, NC. Charles passed from this present life to eternal life on Monday, June 21, 2021. Charles earlier years were spent in Richmond, VA. Where he attended public school through fifth grade. When the family relocated back to Robersonville in early 50’s, he continued attending public school in Martin County. After graduating from East End High School, Robersonville, NC he enlisted in the US Marine Corps, where he earned an honorable discharge in 1959. Charles moved to New Haven, CT. He worked as an orderly at Grace New Haven Hospital. Charles relocated to Brooklyn, NY where he met and married his former wife, Elaine Tucker. From this union they were blessed with two sons. He relocated back to New Haven, CT and continued his education at Gateway Community College receiving his master’s degree (Higher education and an administration). Charles worked at Stop and Shop Warehouse in the receiving department, he worked for the college in the administration division before spending time in Florida for a short period before coming home to Robersonville, NC. Starting a new career with the Department of Correction in Williamston, NC. He retired as a Lieutenant with the Department of Correction, was a lifetime member of the National Rifle Association of America and an active supporter of the NAACP. Charles reconnected with his early childhood friend, Katherine Melton who became his wife. They both joined Willow Baptist Church, Gold Point, NC where he was ordained as a deacon by his pastor. Charles greatest passions was reading, fishing, and hunting. He was indeed an outdoor person, anyone that really knew Charles before his sickness, know he was a man of order. Charles was preceded in death by his parents, Clinton and Elizabeth Andrews; brother, Willie L. Andrews, Milton B. Andrews; sister, Hattie Melton; grandmother, Hattie Highsmith Little; a host of uncles, aunts, cousins. Charles leaves to cherish his memories, his wife and friend, Katherine Melton Andrews; sons, Randall Andrews of Colorado Springs, Brian Andrews of Pooler, GA; daughter, Susan Williams of Charleston, SC; sister, Mildred Moore (Milton) of Winterville, NC; nine grandchildren; four great-grandchildren; a host of nephews, nieces, cousins and extended family members.

Charlie Benjamin Andrews aka &#8220;Charles&#8221; was born on October 16, 1936 the second child of the late, Clinton and Elizabeth Andrews in Martin County, NC. Charles passed from this present life to eternal life on Monday, June 21, 2021. Charles... View Obituary & Service Information

The family of Mr. Charlie Andrews created this Life Tributes page to make it easy to share your memories.

Charlie Benjamin Andrews aka “Charles” was born on October 16,...