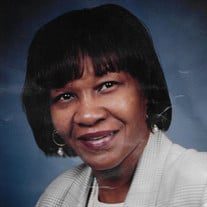 Carolyn Joyce Watson Little Chinn was born on July 17, 1947, to the late Ernest and Callie B. Watson at Pitt Memorial Hospital in Greenville, NC. She departed this life on Saturday, February 5, 2022, at her home surrounded by her loved ones. Carolyn attended the Pitt County Schools and graduated from C. M. Eppes High School in 1967. She continued her education at Bennett College, Greensboro, NC. Carolyn grew up in Sycamore Hill Baptist Church located downtown in Greenville, NC. In fact, her mother’s rule was if you didn’t go to Sunday School and church, you couldn’t put your feet on the ground. In the mid 90’s she was baptized at Faith Baptist Church, Hempstead, NY. In 1968, she moved to Hempstead, Long Island, NY. Carolyn landed a job working with NY Telephone Company, later renamed Nynex and presently known as Verizon. While employed Nynex she held many positions. Started as an operator, then an administrator assistant, engineering assistant, clerical supervisor and put on loans at the LAC office (Loop Assignment Office), where she managed thirty-five people and distributed job assignments. Carolyn returned to Greenville, NC from 1972~1973 and worked with the Pitt County Board of Education as a clerical assistant. Carolyn was selected in 1992 to head a project, which she was the first black female to hold that position. While on this project she traveled to different part of the country to acquire knowledge on how the program CARL (Computerized Administrator Route Layout) was generated. After finishing the learning of the program, she returned to the District Office where she started training the outside Plant Engineers in Nassau and Suffolk County. She then reported to the District Office and received a promotion to a Planning Engineer. In 1996 Nynex merged with Bell Atlantic with this merger, Manager’s job was duplicated, Nynex offered retirement packages and ninety five percent took the offer. Carolyn retired in April 1996 with an honorary membership to Nynex Minority Manage Associate. Two years, later she started working for the Coalition on Child Abuse, where she found her passion helping others. As an administrative assistant part-time, she interacted with CPS (Child Protective Service), Law Enforcement, the families, and donors to the organization. Carolyn worked for the organization for eight years before relocating to Greenville, NC in 2007. She worked for Pitt Community College part-time from 2008-2010. In 2010, she resigned because of a family emergency.

Carolyn Joyce Watson Little Chinn was born on July 17, 1947, to the late Ernest and Callie B. Watson at Pitt Memorial Hospital in Greenville, NC. She departed this life on Saturday, February 5, 2022, at her home surrounded by her loved ones. Carolyn... View Obituary & Service Information