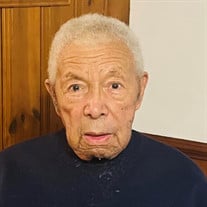 Calvin Roosevelt Williams drifted away in the comfort of his home on February 20, 2022, in the loving presence of his daughter Anita and goddaughter Denise at his side. Calvin was born in Bethel, North Carolina on June 20,1936 to the late Lurlene Lowe Williams and Theodore Williams. Calvin received his education in the Pitt County Schools System in Bethel, North Carolina. In 1957, Calvin left North Carolina at the tender age of 19 to pursue a better life in Bridgeport, CT. There he met and married the love of life Annie Doris Parker, and they were married for 56 years. Annie preceded him in death February 2019. Calvin gave his life to Christ and was baptized April 1981 at St. Paul Missionary Baptist Church in Bridgeport CT. He was a faithful member who took it upon himself to keep the sanctuary clean and maintained and manicured lawn. After relocating to North Carolina, he attended his family church, Medley Chapel CME Church in Bethel, NC then later attended Cornerstone Missionary Baptist Church with his wife Annie. Calvin was the oldest of six children and his sisters and brothers always looked up to him. He loved his family and was a constant source of support and encouragement to them. He and his wife would extend a helping hand by opening their home to family members that needed a place to stay. Calvin loved people and didn't meet any strangers. He loved sharing his stories and words of wisdom to anyone that he met. Calvin’s employment included the United Parcel Services as a Mechanic in Stratford, Conn., Stratford Board of Education and The Baldwin Center as a Maintenance Engineer. During his employment he received numerous recognitions and awards for his years of dedication and service. Calvin retired after 26 years of loyal service. In 1990, Calvin established and operated his own Lawn Manicuring Service where he obtained several contracts. One of which was the Oronoque Country Club in Stratford, CT. It was during this time he found his passion for golf. He enjoyed golfing and spending time on the greens. He befriended several club members and entered various competitions and won several trophies. In 1998, Calvin and Annie decided to return to North Carolina where it all began. Calvin had a strong work ethic that wouldn’t allow him to sit down. He obtained a job with Pitt County Schools and the Town of Farmville Recycling Center. Because of his dedication and service, he was acknowledged by the Town of Farmville and honored in the Farmville Enterprise Newspaper. He finally decided to retire from working. Calvin’s hobbies included spending time visiting family members in Farmville, Bethel, Robersonville, Greenville. He enjoyed spending time at the Wright Brothers Mechanic Shop. He also enjoyed going to his cousins Chance’s Farm in Martin County and gardening with his cousin Sallie. Each year he looked forward to planting vegetables and watermelons. Calvin was preceded in death by his siblings, Cecil, Eugene, Ella, Lourae, Evangeline and Theodore “Sony.” Calvin leaves to cherish his memories one daughter, Anita Williams of Bridgeport, CT; two grandsons, Calvin R. Williams “Jab”, and Timothy K. Williams-Staton “Pete” of Bridgeport, CT; one great-grandson, Maseo K. Daniels-Williams “Mase” of Bridgeport, CT; a goddaughter Denise Panton (Jacques); two brothers-in-law, John A. Parker of Baltimore, Maryland and Robert Parker of Farmville, NC; a host of nieces, nephews cousins, and many friends

Calvin Roosevelt Williams drifted away in the comfort of his home on February 20, 2022, in the loving presence of his daughter Anita and goddaughter Denise at his side. Calvin was born in Bethel, North Carolina on June 20,1936 to the late Lurlene... View Obituary & Service Information

Calvin Roosevelt Williams drifted away in the comfort of his...