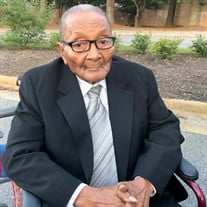 “And God shall wipe away all tears from their eyes; and there shall be no more death, neither sorrow, nor crying, neither shall there be any more pain, for the former things in life are passed away.” ~ Revelations 21:4 ~ Cain David Burgess, Sr. was born December 14, 1926 in Snow Hill, NC, the only child of the late Rev. William David and Mrs. Willie Harrison Sauls Burgess. He transitioned to eternal sleep at his home on Sunday, December 12, 2021. Cain attended Greene County Public Schools and graduated college from Johnson C. Smith University, Charlotte, North Carolina with a Bachelor of Science Degree in Education. While in college he was drafted into the United States Army and served in World War II. He was blessed to return home and continue his education. As an undergraduate, he became a member of the Alpha Epsilon Chapter of Kappa Alpha Psi Fraternity, Inc. He truly loved his fraternity and the bond of brotherhood. In his later years he joined the Sandy Hill Masonic Lodge #119 and became a Mason. Later, Cain married Doris Jean Barfield on June 6, 1970. Three children were joined together in this union. He was lovingly called CD or Pops. Cain chose to effectively change young people’s lives as a teacher and coach. Having been brought up in a loving Christian home, he was a member of St. James Presbyterian Church in Snow Hill, NC and attended Mount Pisgah Presbyterian Church in Rocky Mount, NC. Cain had a shining personality and a contagious smile. He never met a stranger. He befriended everyone and anyone with whom he met. He made all people feel welcome through his sense of humor, wit, and kindness. Cain leaves to cherish his loving memory, two daughters, Cheryl Burgess of the home and Andrea Stevens (Calvin Jr.) of Holly Springs, NC; son, Cain Burgess, Jr of Fayetteville, NC; four granddaughters, Jacqueline, Jocelyn, Jasmine, and Erika; one grandson, Trey; eight great grandchildren, four sisters-in-law, Esther Carr and Carolyn Barfield of Greenville, NC, Edna Lee of Kinston, NC, Tresia Cureton (Steven) of Charlotte, NC; a host of nieces, nephews, and cousins.

&#8220;And God shall wipe away all tears from their eyes; and there shall be no more death, neither sorrow, nor crying, neither shall there be any more pain, for the former things in life are passed away.&#8221; ~ Revelations 21:4 ~ Cain David... View Obituary & Service Information

The family of Mr. Cain Burgess Sr. created this Life Tributes page to make it easy to share your memories.

“And God shall wipe away all tears from their eyes; and there...

Send flowers to the Burgess family.