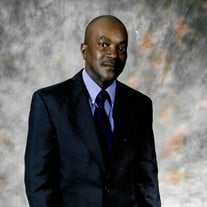 By request of the family, the Service Will Not Be Live Streamed... Barry Joseph Willoughby was born July 15, 1955 in Miami Florida to the late Mattie Lou Willoughby and Ernest Willoughby, Sr. On July 3, 2021 Barry Willoughby transitioned from... View Obituary & Service Information

The family of Mr. Barry Willoughby created this Life Tributes page to make it easy to share your memories.

By request of the family, the Service Will Not Be Live Streamed...

Send flowers to the Willoughby family.