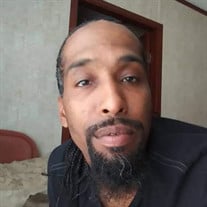 FOR A SON, FATHER, BROTHER, FRIEND Antonio Juan Padilla was called home to eternal life on May 4, 2021. He was born on February 19, 1982 to the union of Carlos Padilla and Lillie Mae Larkins in Jamaica Queens, New York and shared his earthly life with us for 39 years. Antonio was a caring, charming, cheerful young man with an infectious sense of humor and big smile. He loved to help others, especially senior citizens. He was widely known and deeply loved in the community. He never said "No" to anyone who asked him to lend a hand and his co-workers and employers considered him a hard worker. Antonio received his formal education at St. Clement Pope Elementary School and Monsignor McClancy Memorial High School in Queens, New York. He matriculated at St. Francis University in Brooklyn, and Beaufort County Community College in Washington, NC. He enlisted in the United States Marine Corps where he served as a sharpshooter. Antonio accepted Christ and was baptized around the age of eight. Like his twin sister, Antoinette, Antonio was a track athlete throughout school and college. He was his State's high school champion in long jump, triple jump, 300-meter hurdles and played the clarinet. Antonio and his twin sister served as ushers, sang in the choir, ran track together, and shared that special bond of closeness that only twins can share. Antonio was preceded in death by his father, Carlos Padilla; grandparents, Mary Best Tyre, William "Buster" and Gladys Simmons. Antonio was previously married to Marika (nee Young), to which one son, Antonio Juan Padilla, Jr., was born of their union. A loving father, he leaves five beautiful children to cherish his memory, Antonio Juan Padilla, Jr. of Chapel Hill, NC, Zay'Kwon Tuten of Aurora, NC, Jahzara A. Padilla, Alexiha L. Padilla, and Alana Padilla, of Rock Hill, SC; Antonio lives on forever in the hearts of those who love him dearly, his mother, Lil Larkins of Aurora, NC; sister, Eleanor D. Moore (and partner, Desi Baptiste) of Brooklyn, NY; twin sister, Antoinette Y. Padilla (Katharine LaBoy Padilla) of Jamaica, NY; sisters, Regine Padilla of Charlotte, NC and Juanita Padilla of Bronx, NY; maternal aunt and uncle, Annie Grimes and William Charles Larkin, both of Aurora, NC; "play grandmother" Mattie Moore of Aurora, NC; "play mom and dad" Lawrence and Geneva Moore of Aurora; a host of nieces, nephews, cousins, extended family, and friends. Antonio Juan Padilla left us all too soon; he will be missed.

FOR A SON, FATHER, BROTHER, FRIEND Antonio Juan Padilla was called home to eternal life on May 4, 2021. He was born on February 19, 1982 to the union of Carlos Padilla and Lillie Mae Larkins in Jamaica Queens, New York and shared... View Obituary & Service Information

The family of Antonio Juan Padilla created this Life Tributes page to make it easy to share your memories.

Send flowers to the Padilla family.