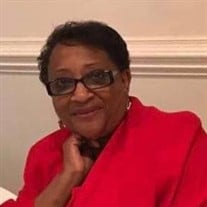 I am now ready to be offered And the time of my departure is at hand, I have fought a good fight, I have finished my course And I have kept the faith. 2 Timothy 4:6-8 Annie Ray Tyson Gainer-Brown was born on December 27th, 1946 to the late Charlie and the late Lulu Tyson in Greene County, NC. After a long and courageous battle with cancer, Annie transitioned from labor to reward on July 7th, 2019 at Vidant Medical Center in Greenville, NC. She was surrounded by her family and friends. Annie was reared in a Christian home and attended Lewis Chapel Free Will Baptist Church in Farmville NC. She later became a member of Faith Tabernacle Missionary Baptist Church, in Stamford, CT where she was a Deaconess. After she moved to Williamston, NC, she then joined Cedar Hill Baptist Church and she joyfully sang in the choir and served as a Deaconess. Annie was a faithful member and an active participant in the advancement of God’s kingdom. She enjoyed studying God’s word by attending Sunday School and Bible Study. Annie received her education from H.B. Suggs High School in Farmville, NC. She relocated to Stamford, CT where she met the love of her life, the late Nathaniel Gainer. After her children were grown, they decided to relocate to Williamston NC, during their later years. Upon the passing of her husband Nathaniel (Pop Pop), she then was blessed to marry William Edward Brown, who was by her side until the time of her passing. Annie was always involved with children. She was self-employed for many years successfully running her own at home day care. She also worked for the Stamford Public School system. In addition, she was a nanny to several families and the most recent was in the daycare center at First United Methodist Church in Williamston, NC. Annie had a natural love for children and the love was reciprocated by the children even into their adulthood. In addition to her parents, Annie Ray Tyson Gainer-Brown was preceded in death by her sister, Dorothy Wills. To rejoice in her memory and mourn her passing, she leaves her loving husband, William Edward Brown of the home; three children, Kenneth (Kim) Strickland of Clayton, NC, Darren (Tammy) Strickland of Janesville, WI and Lakeisha (Michael) Tyson-Williams of Durham, NC; eleven grandchildren; five great grandchildren; one sister, Linda (Gaston) Wills: brother-in-law, Nathan Wills and a host of immediate family to include sisters and brothers-in-law, nieces, nephews, cousins and friends. The Family

I am now ready to be offered And the time of my departure is at hand, I have fought a good fight, I have finished my course And I have kept the faith. 2 Timothy 4:6-8 Annie Ray Tyson Gainer-Brown was born on December 27th, 1946 to the late... View Obituary & Service Information

The family of Mrs. Annie Gainer Brown created this Life Tributes page to make it easy to share your memories.

I am now ready to be offered
And the time of my departure is...