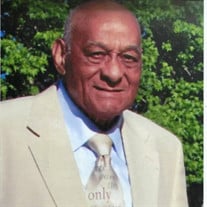 I have fought a good fight, I have finished my course, I have kept the faith: Henceforth there is laid up for me a crown of righteousness, which the Lord, the righteous judge, shall give me at that day. II Timothy 4:7-8 Andrew Augustus Wallace lovingly known as “Gus” was born on May 5, 1928 to the late Henry and Lossie Wallace. He departed this life on June 18, 2019 at Vidant Medical Center in Greenville, NC. Andrew was one of fifteen children. He attended Martin County Public Schools and became a member of Lily of the The Valley Baptist Church at an early age. In 1950 Gus was drafted into the army where he served for two years. He returned home to help on the farm but later decided to relocate to New York. While there, he worked in a sewing factory and later did construction work. Andrew married the true love of his life Simone on June 28, 1990. Together, they reared three beautiful children, Christine, Mark and Andrew, Jr. In 1998, “Gus” relocated back to North Carolina with his family. He joined Belmont Baptist Church where he attended faithfully until his health began to decline. Andrew was not content if he could not have a garden. This was his greatest passion. He enjoyed working in the garden with his grandkids and sharing his fruits and vegetables with others. Andrew was known for his kind heart and genuine love for his family and to all those who were given the opportunity to be blessed with his friendship. Andrew was a great inspiration to his family and he will truly be missed. Andrew was preceded in death by all of his siblings and one grandson, Keion. Andrew leaves to cherish his precious memories, his devoted and loving wife Simone Wallace of the home; three sons, Leon Hines (Janice) of Everetts, NC, Andrew Wallace, Jr. (Shireka) of Everetts, NC, Mark Lopez of Greenville, NC; three daughters, Patricia Stanton (Anthony) of Virginia Beach, Virginia, Linda Pugh of Windsor, NC, Christine Wallace (Danny, Jr.) of Farmville, NC; fifteen grandchildren, Shelia (Dr. Thurman Whitted) Jaunese, Yvette, Janiyah, Aubree, Jaloni, Darion, DeAndrey, Damaree, Jazlynn, Jamar (Lakia), Lora, Leonard, Larry, Jr. (Elaina); fourteen great-grandchildren, nine great-great grandchildren; a host of nieces, nephews, cousins, other relatives and friends.

I have fought a good fight, I have finished my course, I have kept the faith: Henceforth there is laid up for me a crown of righteousness, which the Lord, the righteous judge, shall give me at that day.... View Obituary & Service Information

The family of Mr. Andrew Augusta Wallace created this Life Tributes page to make it easy to share your memories.

I have fought a good fight, I have finished my course, I have...