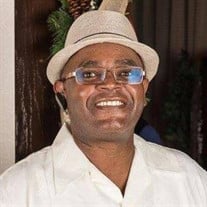 On Thursday May 30, 2019 God and his sovereignty saw fit to call from labor to reward our beloved one, Alfred Charles Moore, son of the late Charlie Moore Jr. and the late Shirley Ruth Moore. Alfred also known as “Al” was born on November 24, 1961 in Elizabeth, New Jersey, and on the morning of May 30, 2019 he quietly transitioned and entered into eternal rest. Al attended Elizabeth High School in Elizabeth, New Jersey. He then enlisted in the Navy in 1979, where he dedicated four years of service and was honorably discharged. On February 9, 1997 he was united with Audrey Marie Highsmith in holy matrimony that lasted for twenty-two years and from this union six children were born. In 1974, Al joined Glorious Hope Baptist Church in Elizabeth, New Jersey under the leadership of Pastor Smith. After relocating to North Carolina in 1993, he joined Exalted Word Ministries under the leadership of Pastor Boone, where he served faithfully and diligently as a Deacon. Al later joined Tabernacle Center Church of Deliverance under the leadership of the late Pastor Hawkins. After years of labor he joined Life of Christ Christian Fellowship under the leadership of Apostle Joyner. Al was employed by Pitt County Schools from 1997-2008 as Head Custodian. He was also employed with Mayne Pharma formerly Metrics from 2007-2016 as Maintenance Supervisor. Al had a passion for cooking, whereas, he started a catering business called Heaven’s Delight. Al and Audrey cooked and sold dinners to schools and businesses in the surrounding areas. He also had a love for photography. Al was a loving husband, father, brother, uncle and cousin to many with a crazy sense of humor. He was easy to love. Al is preceded in death by his brother, Darrel Keith Moore. Al leaves to cherish his fond memories to his wife, Audrey Marie Moore; three daughters, Shawanda Moore of Elizabeth, New Jersey, Raheema and Audreyah Moore of Greenville, North Carolina; three sons, David Howard, Leon Howard and Kenya Howard all of Greenville, North Carolina; two sisters, Yvonne Jones (Darrell) and Sharon Moore; two uncles, James Moore (Nail) and Christopher Moore (Dee-Dee); two aunts, Shirley J. Moore and Evelyn Moore; his step-mother, Lauretta Moore; eleven grandchildren; a host of nieces, nephews, cousins, other relatives, church family and friends.

On Thursday May 30, 2019 God and his sovereignty saw fit to call from labor to reward our beloved one, Alfred Charles Moore, son of the late Charlie Moore Jr. and the late Shirley Ruth Moore. Alfred also known as &#8220;Al&#8221; was born on... View Obituary & Service Information

The family of Mr. Alfred Charles Moore created this Life Tributes page to make it easy to share your memories.

Send flowers to the Moore family.