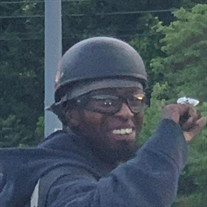 Alfonzo Maurice “AKA Smiley” Wright was born July 26, 1983 in Washington, D.C to Doretha Edwards Wright and the late Alfonzo Wright. He departed this life on July 22, 2021 after a brief illness. Alfonzo known to his family as “Spike” lived most of his life in Virginia where he met the love of his life Monica “AKA Sunshine” in January of 2017. Every time you saw him you saw her. He affectionately called her “his old lady”. He couldn’t be without her, so they were united in marriage at a private ceremony on March 3, 2018. On April 19, 2020 they celebrated their love for one another in a formal ceremony with family and friends. He always told his wife Monica “If I could marry you every year I would”. Prior to his accident they had planned to renew their vows. Alfonzo graduated from Garfield Senior High School in Woodbridge, Virginia in 2001. He dedicated over 15 years of service working at Wis Inventory Services. He also was a Licensed Barber. In 2019 he started his own landscaping and construction company “Wright & Son Services. In 2019 Alfonzo wanted a Fresh Start so he relocated to Greenville, NC. He was a people person and he enjoyed helping others. So much so he could sell water to a well. He got his name “Smiley” because no matter how mad or happy he got he was always smiling showing his teeth. Ever the enthusiast, Alfonzo displayed a passion for exploring his interests at an early age, whether it was a ten-speed bicycle around the neighborhood block or a HAYABUSA weaving through congestion on I-95. If it had wheels, he was getting on it and going fast as possible. He was introduced to the Bike World by Charles Edward AKA “Lonely” and known as “Smiley”. He was a member of the Liberty Riders Motorcycle Team, shortly after joining them he started his own Bike Team “L4L (Liberty For Life). The team was put together with friend and families. He sponsored numerous community services events such as, car washes, food give away and Christmas toy drives. Smiley decided to “take it up a notch” and joined Wheels of Soul MC and loved every minute of it. Rain, Sleet or Snow he was on his bike. It was in the Bike World where he met his lovely wife Monica. Alfonzo leaves to cherish his memories, his loving wife, Monica Wright of the home; three sons, Deontae Pender, Lorenzo Wright and Sa’Mar Robinson; three daughters, Sa’Myaih Robinson, Sa”Mirah Wright and Hannah Russell; his mother, Doretha Wright; a twin brother, Alonzo Wright; one sister, Giovanni Wright; a host of aunts, uncles, nieces, nephews, other relatives and friends.

The family of Mr. Alfonzo Maurice Wright created this Life Tributes page to make it easy to share your memories.

Send flowers to the Wright family.