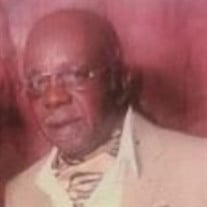 Albert Earl Whitfield peacefully entered eternal rest on December 23, 2020. He was born on September 7, 1937, in New Bern, NC to the late David Earl (1985) and Ethel Dawson (1986) Whitfield. Albert was raised in New Bern and lived there until he joined the Army. After his duty in the Army, he relocated to the Washington, DC Metropolitan Area. There he met and married Barbara Southern, to whom he was married for over 30 years until her death in 1994. Out of that union, Albert and Barbara had two children, Vicki and Rodney. Albert worked at Saint Elizabeth’s Hospital for close to 40 years until his retirement. In 1999, Albert married Sylvia Sneed and relocated to Grimesland, NC. He and Sylvia remained married and lived in Grimesland until his passing, where he was an active member of St. Timothy’s Episcopal Church. Albert enjoyed traveling and sports and was inducted into the District of Columbia Fast Pitch Softball Hall of Fame in 1991. In his later years, he enjoyed caring for his fish in the ponds he created in his backyard, collecting electric trains, watching TV westerns, and engaging in his deep passion for the UCONN woman’s basketball team, as he watched their games relentlessly. He loved spending time with and talking to family and used the catch phrase “Hey Baby” when greeting female family members or friends. Albert was preceded in death by his brothers and sisters, David Earl, Jr. (1993), Carrie Beatrice (2011), George Haywood (1987), Charlotte Marie (2020) and John Henry (1994). Albert leaves to cherish his memory, his current wife, Sylvia; children, Vicki, Robert (Pamela), Rodney (Robin) and Natalie; grandchildren, Ryan, Tiffany (Aaron), Savonne, Chris, Danielle, Marquia, Isaiah, Bria, and Quinton; great grandchildren, Jalen, Kingston, Kairo, Antoine, Sienna, Chris, Jalen-Christoper, Christian; a host of nieces, nephews, cousins, friends, and extended family who share in our loss.

Albert Earl Whitfield peacefully entered eternal rest on December 23, 2020. He was born on September 7, 1937, in New Bern, NC to the late David Earl (1985) and Ethel Dawson (1986) Whitfield. Albert was raised in New Bern and lived there until... View Obituary & Service Information

The family of Mr. Albert Earl Whitfield created this Life Tributes page to make it easy to share your memories.

Send flowers to the Whitfield family.