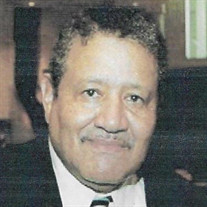 Deacon Alan Warren Nelson was born October 21, 1939 to the late F. Warren Nelson and Lilian Hart Balfour Nelson in Abington, PA. He transitioned from Earth to his place in Heaven on Saturday, December 5, 2020. He left very peacefully in his bed at the Vidant Medical Center in Greenville, NC. The Word of God says that “…to be absent from the body is to be ever present with the Lord”. After being sick for such a long time, he will no longer suffer. Alan had a great and full life. He loved the Lord and was devoted to his wife, Marcile and his family. Alan attended Trenton High School, but chose to enlist in the United States Army Reserves before graduation, later enlisting in the United States Navy. In the Navy, he served on the USS Saratoga until his honorable discharge. He served as a faithful Deacon and a member of Church of God in Christ in New Haven, CT and in Greenville, NC. He will also be remembered for his work as member of the Board of Directors for Bells for Peace Inc.- a non-profit organization for enriching the history of Virginia Union University in memory of his late Aunt and Uncle Dr. John Malcus Ellison Sr and his wife Elizabeth Balfour Ellison. During his journey, he had many jobs but was most proud of his employment with The Opportunity Industrialization Center of America, Inc. and his work as a Road Manager for Buddha Records. He was especially proud of the 7 years he spent as the writer of programs, advertising coordination and conducting radio sales for the Willie Wright Soul Session Radio Show on WFIL- 1500AM. He was the personal body guard for executives and entertainers in New Haven, New York City, Chicago, Las Angeles, Washington, DC, Miami, Paris, France, Gabon, West Africa, and many more. He touched many prominent lives as he travelled his journey, including entertainers- James Brown, Jimmy Jackson, Barry White, Junior Walker, Teddy Pendergrass, Bobby Byrd, Vickie Byrd, Gladys Knight; Boxers- Joe Frazier and Marvin Frazier, Mrs. Coretta Scott- King, Rev, Jesse Jackson, Sr, US Congresswoman Eleanor Holmes- Norton, Detroit Mayor- Coleman Young, President Jimmy Carter, CT State Treasurer Henry Parker, Jr., CT Senator John Daniels, Min. Ali Ben Bongo- Odinbra (son of Albert Ben Bongo- Odinbra, President if West Africa) to name a few. Alan leaves behind his precious wife, Marcile Woodland Nelson who was by his side and totally devoted for 58 years of marriage. He was the proud father of two daughters, Heidi Maldonado of New Haven, CT and Annette Maldonado of Wilmington, NC, and grandfather to Terry, Alexi, Gina, Derrick and Anthony. He was a delighted great- grandfather. Alan was the second oldest of 8 siblings- Jesse Hoagland (Wilma) of Trenton, NJ; Raymond Hoagland (Mary) of Raleigh, NC; Andrew Douglas Nelson (Loerene) of Charlotte, NC; Sherry Marie Cook (Michael) of Monroe, NC; Dianne Walker (Ernest) of Richmond, VA; Rosemary Washington (John Pete, deceased) of Trenton, NJ; and David Nelson (Ruby) of Pittsburgh, CA. He is fondly remembered by a host of cousins, nieces, nephews and friends.

Deacon Alan Warren Nelson was born October 21, 1939 to the late F. Warren Nelson and Lilian Hart Balfour Nelson in Abington, PA. He transitioned from Earth to his place in Heaven on Saturday, December 5, 2020. He left very peacefully in his... View Obituary & Service Information

The family of Mr. Alan Nelson created this Life Tributes page to make it easy to share your memories.

Send flowers to the Nelson family.