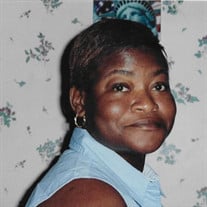 “I have fought the good fight, I have finished the race, I have kept the faith. Henceforth there is laid up for me a crown of righteousness, which the Lord, the righteous judge, shall give me at that day: and not to me only, but unto all them also that love his appearing” - 2 Timothy 4:7-8 Agnes Elaine Pettaway departed this life on Monday, July 5, 2021 at Vidant Hospital surrounded by loved ones. Agnes, who went by her middle name Elaine, was affectionately called “Auntie” by her many nieces and nephews, whom she loved dearly. She lived a joyous life as a child of God, wife, mother, grandmother, sister, cousin, and friend. Elaine was born on March 29, 1961 to David Lee and Johnnie Ann Wooten. She was reared by her grandmother, Annie Spain Wooten in North Carolina. She attended the Pitt and Edgecombe County School Systems. After graduating, Elaine worked in the Pitt County School System until her health declined. Elaine was a member of Mt. Zion Church in Bethel, NC where she enjoyed fellowship and giving God the glory. She attended until her health began to fail. That didn’t stop Elaine from praising our Lord and Savior. She would always give thanks to the Father referring to Him with a loving knowing as “My God”. Elaine was preceded in death by her father, David Lee; her son, Jimmy Jerome Pettaway; her maternal grandparents, John and Annie Spain Wooten; her paternal grandparents, Clarence and Gladis Anderson. Elaine leaves to cherish her memory, the love of her life for fortyeight years, Jimmie Pettaway of the home; daughter, Tiffany Pettaway of Greenville, NC; grandchildren, Jireece Pettaway, Jamarion Pettaway, Brycen Mobley and DeShawn Mobley all of Greenville, NC, Izaiah Corbett of Farmville, NC, Isaac Pettaway, Malachi Pettaway, Jordan Pettaway, Zion Pettaway of Wilson, NC; her mother, Johnnie Ann Wooten of Greenville, NC; brothers, Cedric Wooten (April) and Filton Wooten of Greenville, NC; sisters, Deborah Wooten (Isaac) and Shakina Wooten of Brooklyn, NY, Joann Tillery of Greenville, NC and Shakira Wooten of South Carolina; a cousin who was much like a sister, Geraldine Lee of Greenville, NC; daughter-in-law, Caleesha Corbett of Wilson, NC; brothers-in-law, Darnell Pettaway (Carolyn) of Fayetteville, NC, Dan Pettaway (Gaynelle) and Ralph Pettaway (Donna) of Bethel, NC; sistersin-law, Betty Jean Manning and Barbara Pettaway of Greenville, NC; aunts, Reverend Dora Cox (William) and Emma Cox (Robert) both of Bethel, NC; uncles, Azil Wooten and Elmon Wooten of Greenville, NC; a host of cousins, nieces and nephews.

&#8220;I have fought the good fight, I have finished the race, I have kept the faith. Henceforth there is laid up for me a crown of righteousness, which the Lord, the righteous judge, shall give me at that day: and not to me only, but unto all... View Obituary & Service Information

The family of Ms. Agnes Elaine Pettaway created this Life Tributes page to make it easy to share your memories.

“I have fought the good fight, I have finished the race, I have...

Send flowers to the Pettaway family.