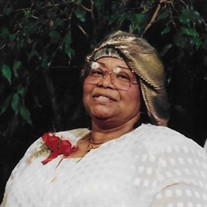 Ada Ruth Atkinson Highsmith was born on August 7, 1937, to the late Ada and Mark Atkinson. God saw the road was getting rough, the hill was hard to climb; He gently closed those loving eyes and whispered, “Peace Be Thine”. On November 15, 2021, God sent his guardian angel to usher her into eternal peace. Ada was married to the love of her life, James Highsmith, who preceded her in death. To this union two sons were born, Maurice and Gevoice Highsmith. Ada was reared in the Bethel, NC community. In her adult years she called New Milford Connecticut and Virginia Beach, Virginia home. She was a faithful member of Miracle Faith World Outreach in Monroe, Connecticut, where she attended until she relocated to Virginia Beach. Ada spent her last years back in her home state, residing in Greenville, NC. She received her Bachelor of Science Degree in education from North Carolina Central University. It was because of her passion for her students and profession that she dedicated over 40 plus years as an educator. Ada not only taught her students but for many she became a surrogate mother figure. Ada’s love for her husband and sons were greater than words themselves, it was evident in her every action. The love and dedication that she had for them carried on beyond their earthy walk. Nobody loved on and celebrated family like Ada. Her only grandchild, siblings, countless number of nieces, nephews, cousins, and friends have been loved on, supported and if needed chastised in such a loving manner. She would go out of her way to be a blessing to someone else. She was amazing in the kitchen and her banana pudding could have gone up against the best of them. The loss of Ada will be great on her family, her absence will be felt forever. Ada was also preceded in death by her two sons, Maurice and Gevoice Highsmith; her siblings, John, Forney, Willie, Mark, Lucille, Sally, Shirley, Dorothy and James. Ada leaves to cherish her memories her granddaughter, Paris Ruffin (Tray) of Virginia Beach, Virginia; one brother, Clarence Atkinson (Geraldine) of Greenville, NC; two sisters in law, Willie Maude Atkinson of Gloucester, VA, Lula Mae Terry of Baltimore, MD; one brother in law, Glen Earl Highsmith (Rosa) Bethel, CT; special niece, Evelyn Maye of Upper Marlboro, Maryland and special nephew, Juan Atkinson of Greenville, NC who were both instrumental in caring for her in recent years; best friend, Lois Atlas of Danbury, CT; two daughters in Christ, Pamela Clark of Virginia Beach, VA, Karolyn Spence of Elizabeth City, NC; along with a host of nieces, nephews, other relatives and friends. 2 Timothy 4:7-8 KJV I have fought the good fight, I have finished the race, I have kept the faith. 8 Now there is in store for me the crown of righteousness, which the Lord, the righteous Judge, will award to me on that day—and not only to me, but also to all who have longed for his appearing.

Ada Ruth Atkinson Highsmith was born on August 7, 1937, to the late Ada and Mark Atkinson. God saw the road was getting rough, the hill was hard to climb; He gently closed those loving eyes and whispered, &#8220;Peace Be Thine&#8221;. On November... View Obituary & Service Information

The family of Mrs. Ada Highsmith created this Life Tributes page to make it easy to share your memories.

Send flowers to the Highsmith family.