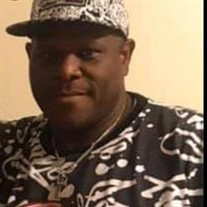 Aakim Hosea Franklin, the youngest child of Mrs. Raleighe-Teale Franklin, was born on September 6, 1968 and transitioned to glory on September 12, 2021. Aakim was raised in Washington, DC where he graduated from Ballou High School. He was a quick-witted, happy, playful (and often mischievous) child who would do just about anything to make one laugh. His wit, sense of humor, and smile will always be remembered. He often spoke about his memories of the “old house” with his grandfather, William Hare, and his doting grandmother, Constance Gambrell Hare, who loved him as her own. There, he “grew up” with his uncle, Brandt Hare, with whom he had a special bond, and aunts Diane and Penny. Although Aakim's mischievous nature had a way of leading him down the wrong path at times (he was not a perfect man – as none of us are), in a moment of clarity he gave his life to the Lord and accepted Christ as his personal Savior. He often spoke of the goodness of God and acknowledged how blessed he was. Last year, Aakim enrolled in Pitt Community College to pursue his dream of becoming a Drug Treatment Counselor. He was an avid Washington Redskins fan (win or lose) and, just like his grandfather, he loved boxing. His favorite pastimes included eating, playing cards, and fellowshipping with his family and friends. Aakim was preceded in death by his mother, Mrs. Raleighe-Teale Franklin; grandfather, William Hare; and grandmother, Constance Gambrell Hare. Aakim is survived by his finance’, Andrea Braswell and her daughter Zaniyah Hines; son, Dante Franklin; brother, Troy D. Franklin; sister, Kimberly M. Franklin; uncle, Brandt Hare (Ramona); aunts, Diane “Dee” Apetsi, and Nasa “Penny” Edwards (Robert); and a host of cousins and other family who will forever cherish his memory.

Aakim Hosea Franklin, the youngest child of Mrs. Raleighe-Teale Franklin, was born on September 6, 1968 and transitioned to glory on September 12, 2021. Aakim was raised in Washington, DC where he graduated from Ballou High School. He was a... View Obituary & Service Information

The family of Mr. Aakim Franklin created this Life Tributes page to make it easy to share your memories.

Send flowers to the Franklin family.